Could you guess the legendary hip-hop album from just a simple graphic? That’s the challenge thrown down by Dorothy, the Liverpool-based studio and shop that has released a new print celebrating classic releases from the last four decades.

Continuing its usual theme of imagined collectable postage stamps, displayed together in a fictional tapestry that makes up an entire sheet, this latest offering by Dorothy tips its hat to everyone from Grandmaster Flash and Run DMC to Kendrick Lamar and Run The Jewels.

Titled Stamp Albums: Hip-Hop, the six-colour litho print with silver foil includes 42 reimagined albums in graphic form, beginning – as you’d expect – with the 1982 breakthrough album The Message by Grandmaster Flash and The Furious Five. From the old to the new school; from the golden age of hip-hop to the more modern slant; from east coast to west, and the crossover success of alternative and progressive rap in-between, Dorothy’s print is just like a mini hip-hop history lesson, as it weaves its way through 41 other iconic albums in chronological order. 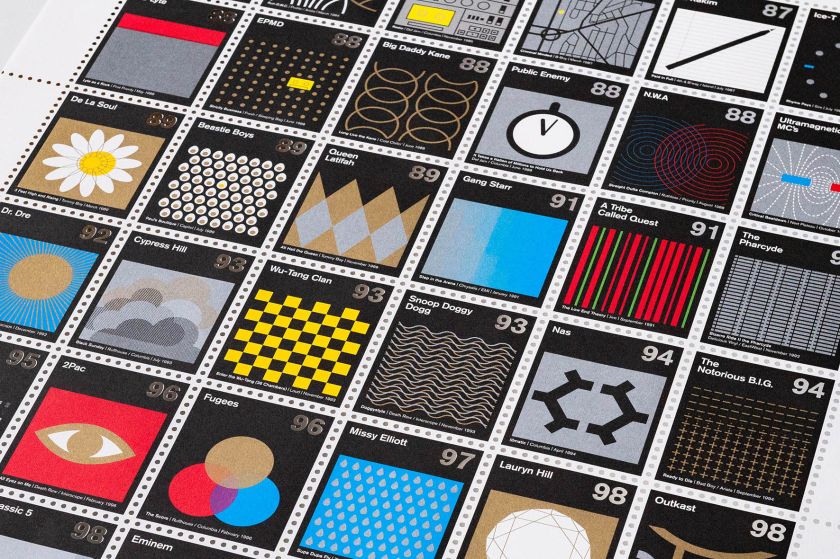 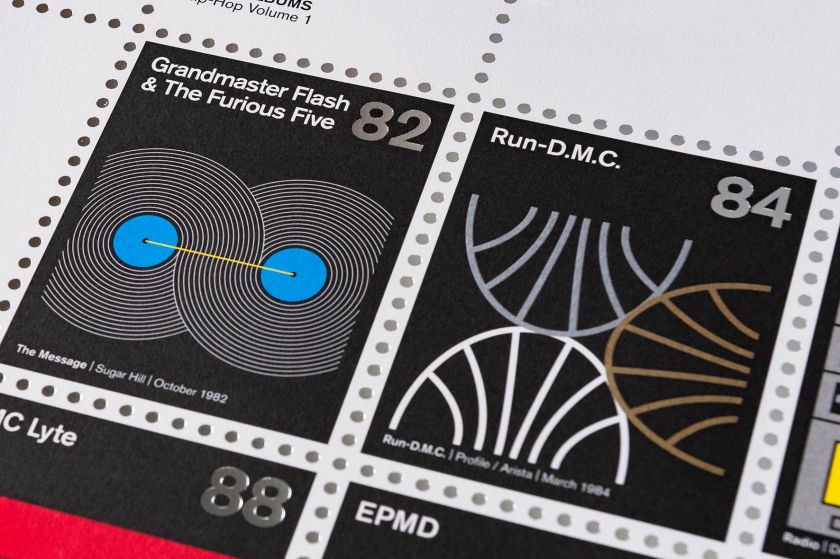 You can expect graphical takes on Eric B. & Rakim’s Paid in Full, Public Enemy’s It Takes a Nation of Millions to Hold Us Back, De La Soul’s 3 Feet High & Rising, and Paul’s Boutique by the Beastie Boys. There’s A Tribe Called Quest’s The Low End Theory and Wu-Tang Clan’s Enter The Wu-Tang. Fugees makes the list with The Score, while Missy Elliott’s Supa Dupa Fly is also featured. Lauryn Hill and The Miseducation of Lauryn Hill is another highlight, as is Eminem’s The Slim Shady LP. And who could leave Jay-Z and The Blueprint, Kanye West and My Beautiful Dark Twisted Fantasy or Kendrick Lamar and To Pimp a Butterfly?

Each stamp features a graphic inspired by the album or one of its tracks and includes the date of release and the original label that it was released on. For example, the instantly recognisable green and red colour palette of Tribe’s second studio album stands out a mile on that particular stamp, while Flavor Flav’s iconic clock necklace is right there for Dorothy’s tribute to Public Enemy’s 1988 classic. 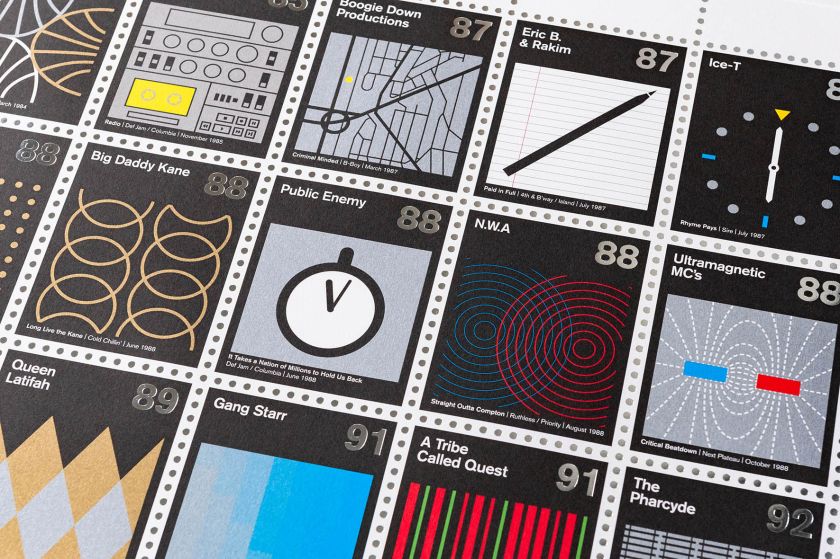 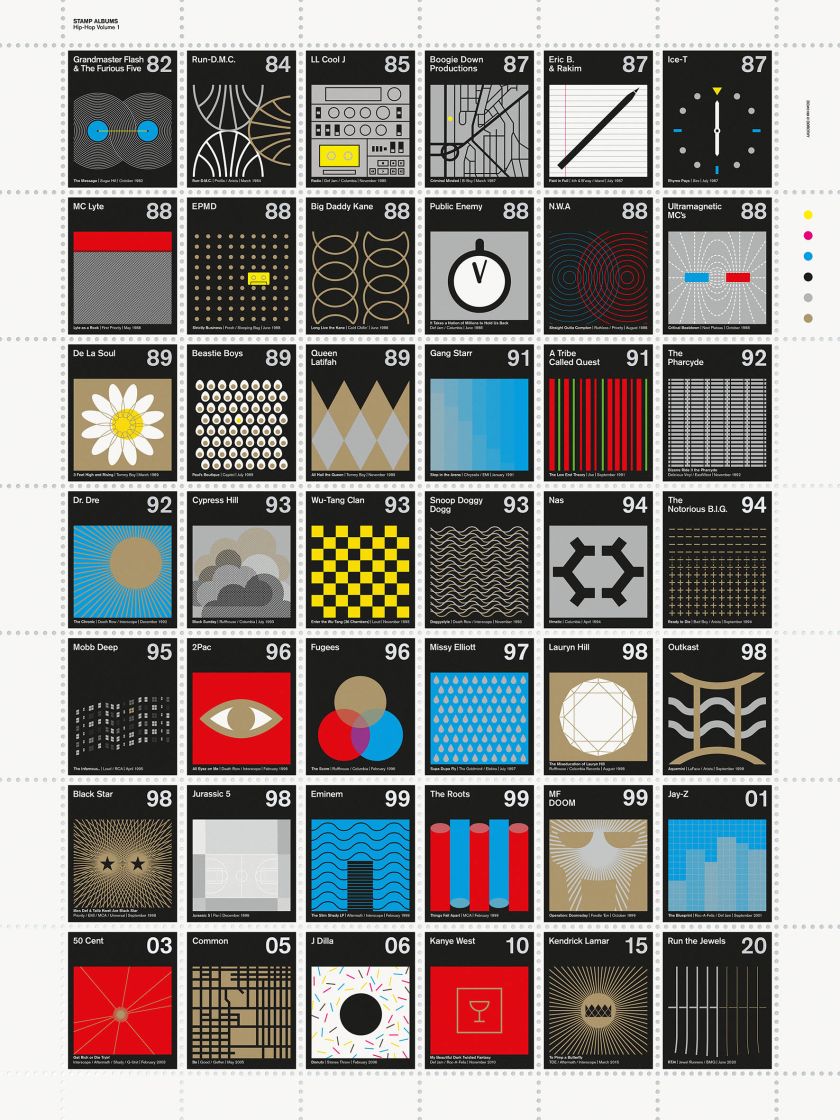 Even better? You can purchase the artwork for £35 from Dorothy’s online store or choose from eight other prints from its bestselling Stamp Collection, which includes equally joyous celebrations of seminal post-punk, post-rock, psych, electronic and alternative albums.

The post Guess the hip-hop album with Dorothy’s stamp on the most iconic releases of all time first appeared on iPixel Creative.

view all posts by admin

Sometimes, your regular 9-to-5 job just doesn’t cut it. You may need an additional income make money online to pay bills, rent, or fund your

Earlier this year, Glossier founder Emily Weiss stepped down as CEO, the role was filled by Kyle Healy formerly the brand Chief Commercial Officer. With

In the digital world, everything you do online is tracked and mined by marketers to monetize your data. They track your browsing activities, cookies data,

In this roundup, we look at some of the best vegan affiliate programs on the Interwebs right now.
These are ideal for anyone with a blog